Happy 124th Labour day, Canada!  From its humble beginnings in 1872, it was over 20 years before a National Holiday honoring workers was declared in 1894.  Canadian workers paid dearly with blood, sweat, tears and sometimes their lives to achieve a 58 hour work week – the first battle won by the early, newly organized labour activists.

As organized labour we’ve come a long way in 124 years – a relatively short period of time. With globalization and increasing pressures from the right, it’s more important than ever that we don’t forget the sacrifices made by a few over a hundred years ago. Let’s take some time this Monday to reflect on where we came from and how we can continue to make Canada a better place for all workers.

The Yukon is a pretty well-organized place, at least when compared to the rest of Canada. With almost 33% of our workers unionized, we boast the highest union density per capita and that density has been maintained for over 50 years. In many ways, Yukon is a big union town. This Labour Day, we want to thank everyone who works so hard to keep this territory and this country strong. 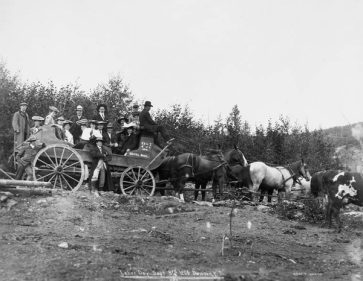 This historical photo shows Dawson’s Labour Day Parade in 1906. In the middle of the last century, Yukon’s workers began organizing in earnest. The United Brotherhood of Carpenters Local 2499 was chartered in 1947, while the Yukon Teacher’s Association formed in 1955. The UA, or United Association of Allied Workers representing plumbers, pipe fitters and welders established a Yukon presence in 1958 and the Yukon Territorial Public Service Association (YTPSA) formed in 1965. The YTPSA was the first incarnation of what is now the Yukon Employees’ Union, or YEU/PSAC.

This year, YEU and PSAC are bargaining on behalf of members working for Yukon employers large and small. We are up against some serious challenges to the rights we have fought for over the years. Several of our bargaining units have been forced to prove their solidarity through strike votes and strike action. In these anti-union times, it’s not easy to hold on to what we have. We can’t rest on our laurels or believe that everything we have all worked so hard for is secure.

Employers have their own agendas, and it’s up to all of us to keep the pressure on, and protect the rights of Yukons’ workers, unionized or not.

We hope you’ll join us as we celebrate with our 24th annual Free Labour Day Barbeque in Shipyards Park. Each year our activists pull off one of the largest – probably THE largest free public meal in the territory, complete with fun kids’ activities and coffee provided by Midnight Sun Coffee.  We’ll also be collecting your donations for the Whitehorse Food Bank, building our 2nd Annual Mountain of Mac & Cheese! Hope to see you there! 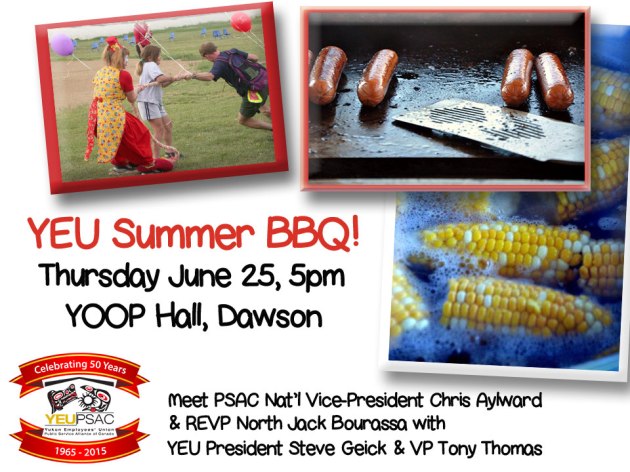 PSAC National Vice-President Chris Aylward and PSAC’s Regional Executive Vice-President for the North Jack Bourassa will join YEU President Steve Geick for a fairly epic summer road trip. They’ll be visiting all points between Whitehorse & Dawson, meeting Union and community members wherever they stop. There are AGM’s planned for Dawson City and a repeat engagement of the ever popular YEU Summer Bbq at the YOOP Hall.  If you’re in Dawson please stop by for a burger and a chance to talk with PSAC National leadership.

Come down and introduce yourself, find out what the union has planned for the next year and enjoy a great meal. Because really, what could be better than burgers and dogs in Dawson in June?!

Once the dogs and burgers are done and the BBQ has been stored away for another year, the intrepid union gentlemen will head up the highway, over the Top of the World and down through Beaver Creek, Destruction Bay, Burwash… you see where this is going, right? If you’re along the route, please make time to come out and say hello. We’ll let you know when to expect them in each location.

AGM’s will be held for Local Y033 (City of Dawson) and Y018 (KVA) workers on Wednesday June 24th at the YOOP Hall, so if you are a member of either of those Locals, make sure you come out the night before the bbq to your union meeting.