Yukon’s delegates continue to lead and inspire at the National Convention. Again and again, members of our group have stood in front of hundreds of union activists and presented cohesive, well thought out and persuasive arguments for and against resolutions under debate. Yukon delegates have also contributed greatly to the work of each Convention Committee, seated at the head table to face the membership and their questions.

Teresa Acheson spoke in favour of a resolution to fully fund Regional Conventions, reminding delegates that the proposed budget reflects lower dues for all members, even with this resolution. She reminded them also that every delegate at #PSAC2018 attends thanks to funding from various sources. After coming to the floor again and again, convention after convention, 2018 delegates strongly supported the resolution to fully fund Regional Conventions. Teresa’s decisive arguments came just ahead of the vote, and we believe she helped solidify the win.

YEU’s Stephanie Coulthard stood in support of a resolution to help democratize the election of PSAC Regional Executive Vice President, North. Previously, the position required a candidate to move to Yellowknife if elected. This non-negotiable barrier discouraged many qualified, committed activists from considering a campaign. The floor voted in favour of the resolution to allow REVP’s to live and work in any city with a PSAC Regional Office. For northerners, that means REVP candidates may choose to live in either Whitehorse, Yellowknife, or Iqaluit.

A long line of buses waited outside the Toronto Convention Centre to drive delegates to the start of a Fix Finance & Fix Phoenix rally at noon. Despite the rain, a large and raucous crowd marched and chanted, arriving at the constituency office of Finance Minister Bill Morneau. He has a lot to answer for to the workers of this country, including Bill C-27 which will jeopardize the pensions of Canadian workers. Our Yukon activists didn’t let the rains low them down, marching in full solidarity with our affected brothers and sisters. Phoenix needs to go, and Canada’s public servants MUST be paid, correctly and on time, for their work. The Universal Declaration of Human Rights, Article 23.3 states “Everyone who works has the right to just and favourable remuneration ensuring for himself and his family an existence worthy of human dignity, and supplemented, if necessary, by other means of social protection.” The PSAC demands that the Liberal Government fix Phoenix now.

After hours of debate with over 80 speakers lined up at the microphones around the hall, a controversial resolution put forward by the Collective Bargaining Committee to allow electronic voting in some cases was passed. Following the vote, delegates again lined up at the microphones to record against, ensuring the minutes show their opposition to this contentious change. For those of us in the far north, we believe this change may allow greater participation in ratification votes for members in remote communities.

A moving tribute to 30 year PSAC activist and two term President Robyn Benson wrapped up the business of the day, with delegates looking forward to an old fashioned Manitoba Social in her honour. Tomorrow will provide an opportunity to get back to debate and voting for the morning before Frank Miller, elder from the Mohawk Turtle Clan offers a traditional blessing to close the 2018 Convention. 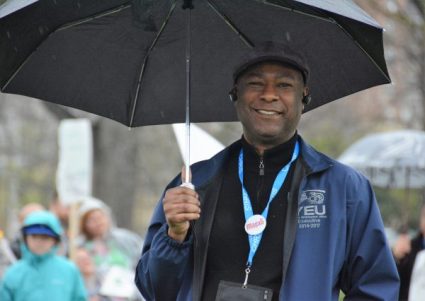 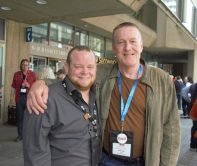 Stephanie and Derek getting ready to march to #FixPhoenix

YEU VP Paul Johnston speaks to the issue of domestic violence on the floor of convention, #PSAC2018

YEU is excited to launch our 2014 Triennial Convention in downtown Whitehorse. For the next three days, northern Union activists will discuss & debate resolutions to govern the working of the organization and elect their leadership for the next cycle.

Here’s a photo retrospective looking back at some of what we have done over this past cycle… we’ve been busy!